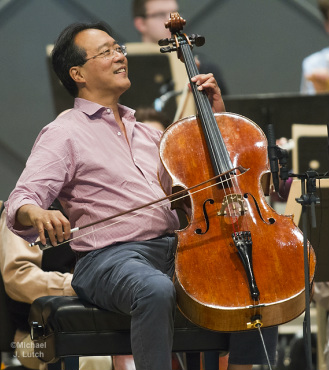 Photo by Michael J. Lutch.
“How fortunate that TMF is so devoted to giving voice through music to people whose voices were tragically silenced.”  —Yo-Yo Ma

Internationally revered cellist Yo-Yo Ma lends his iconic talent and charisma to our 2013 Gala with a performance of solo works for cello.

Mr. Ma is one of TMF's first advocates and has always been dedicated to the exploration of music as a means of communication and as a vehicle for bridging history and culture.

His achievements include the internationally acclaimed concerts, tours, and recordings of the Silk Road Project, for which he serves as Artistic Director. Mr. Ma is also widely recognized for his strong commitment to educational programs that bring the world into the classroom and the classroom into the world. While touring, he takes time whenever possible to conduct master classes as well as more informal programs for students, musicians and non-musicians alike. He has also reached young audiences through appearances on “Arthur,” “Mister Rogers’ Neighborhood,” and “Sesame Street.”

Mr. Ma's discography of nearly one hundred albums includes more than fifteen Academy Award winners, and he is one of the bestselling classical recording artists in the world. His copious awards include the Avery Fisher Prize, the Glenn Gould Prize, and the Presidential medal of Freedom. Mr. Ma serves as a UN Messenger of peace and as a member of the Presidents Committee on the Arts & Humanities. He has performed at inaugurations and commemorations for eight American presidents.

Many more details of Mr. Ma's life and career are here.