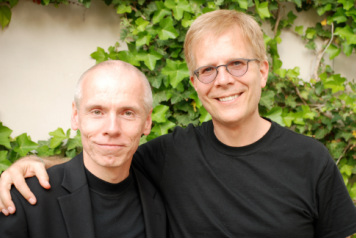 Vit Zouhar (left) with TMF Executive Director Mark Ludwig.
A highlight of the 2013 Gala is the American premiere of two TMF Commissions, by Pablo Ortiz and Vit Zouhar, which had their debut at the 2012 Prague Spring Festival in a sold-out concert at the Church of St. Simon and Jude.  Mr. Zouhar composed "Days," for harpsichord, flute, and string trio. He is a renowned Czech composer, musicologist, and educator acclaimed for his chamber, orchestral, and electro-acoustical works. His numerous recordings and honors are detailed more fully here.

"I vividly recall the rapid succession of situations, names, and memories that came to my mind when Mark Ludwig asked me to write a composition for the Terezin Music Foundation: the Pavel Haas Symphony, which would be completed by my father; a trip outside Prague; Mum's colleague singing at the premiere of Brundibár; the environs of Weimar with my parents and sister; a documentary about Terezín; a garden table and bench; Viktor Ullmann's remark: "Theresienstadt was and remains for me a school that teaches structure." Mark's request named the space these images held in my imagination.

My attention was drawn to the garden table. In the 1944 documentary "Theresienstadt," there is a scene in which people are chatting behind something that resembles a garden table. The shot aims to create the impression of harmony, relaxation; the camera slowly passes several tables where smiling, well-dressed people convivially talk, play cards, enjoy themselves. Yet the repetition of tables within a single shot, tables
divided by plank beds, looks strange. I began slowing down the shot. And it was this that ultimately determined the concept and principles of my composition: observance, repetition. Processes during which contrasting objects do not lose their original meaning yet seem to come together and become similar.

The composition "Days" is a succession of contradictory and easily discerned musical gestures (diary entries) that repeat, return, blend, overlap, and decelerate. They hover in time. Their returns accentuate the similarity of details and erase differences. Yet they do not lose their original character.

The composition consists of a one-movement irregular arch whose drama is built on the principles of contrast and gradation. Its structure refers to the tradition of three-part form, as well as the golden section. Although individual objects are not narrative, they jointly facilitate another narration. A double reference is also the center of gravity of the G pattern. In addition to the traditional characteristics borne by the G minor and G major keys, it is also the letter "G" as the designation G 484, which was inscribed on the first
family transport from Brno to Terezin.

The title of the composition, "Days," is deliberately neutral. It denominates the time frame, context, the only real bond within which everything takes place and in which  memories are concentrated. Many things seemingly do not exist. When having a cursory glance at the imaginary landscape, everything gives the impression of a wasteland, where there is nothing. Yet a single concentrated look into an arbitrary point suffices, and all of a sudden the upper layer is uncovered."