THOMAS OBOE LEE, TMF Commission composer
His commission, The Flowers from Terezin, will be performed by the Boston Children's Chorus. 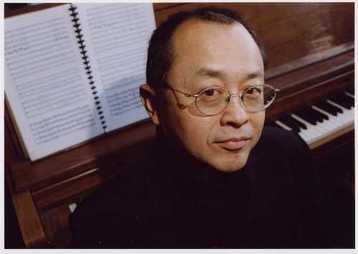 "Mark Ludwig and I have collaborated on a number of projects for the Terezin Music Foundation. In 2004, he asked me to write a choral work for the students at Boston Academy. He provided me with the texts for the work: poems by Walt Whitman; Mary Oliver; excerpts from the Terezin opera, Brundidbar; and a short haiku by Matsuo Basho. I had fun setting these poems. The Walt Whitman poem 'Proud Music of the Storm' was full of references to music from all over the world. The Oliver poem 'Wild Geese' provided meditations on the imagination, the passing world, and nature. The excerpt from Brundibar sang of defiance against tyranny and inner strength. The song cycle ends with the sound of temple bells . . .

I hope the listener will find as much joy and fulfillment as I did when I was composing this work."
Thomas Oboe Lee (b. 1945) is a professor of Music at Boston College and a prolific composer who has won numerous honors and distinctions. His music has been recorded on Nonesuch, MCA Classics, Koch International Classics, BMG Catalyst, Arsis Audio, BMOP Sound, Northeastern and Gunther Schuller's GM Recordings, Inc. Mr. Lee’s most popular work, "Morango . . . Almost A Tango," written for and recorded by the Kronos Quartet,[5] has been used in dance by choreographers including Michael Tracy for Pilobolus, Jiri Kylian for Netherlands Dance Theater, and many others.