STEPHEN FEIGENBAUM, TMF Commission composer
His TMF Commission, "Songs of Sorrow and Hope" for chorus and piano, will be performed at our 2014 Gala by the Boston Children's Chorus. 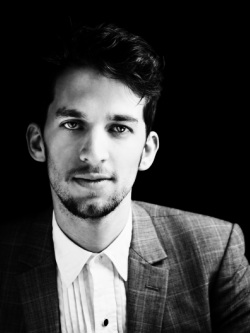 Photo by Michiko Tierney.
Stephen Feigenbaum is an award-winning twenty-five-year-old composer of music for the concert hall and theater. When he was nineteen, his Serenade for Strings was recorded by the Cincinnati Pops under Erich Kunzel and released on a CD by Telarc. Stephen is winner of two ASCAP Morton Gould Young Composer Awards and the Charles Ives Scholarship from the American Academy of Arts and Letters. In 2012, he won the Albany Symphony Orchestra's Composer to Center Stage competition, which resulted mentoring by John Corigliano. Stephen's music has been heard at major international venues.

A native of Winchester, Massachusetts, Stephen majored in music at Yale College and received a Master of Music from the Yale School of Music. He has studied with Ezra Laderman, Michael Gandolfi, Samuel Adler, Kathryn Alexander, and Rodney Lister. Stephen is composing a TMF commission to be premiered by the Boston Children’s Chorus on their tour with TMF in the summer of 2015.

ABOUT "SONGS OF SORROW AND HOPE"

This TMF Commission is sponsored by Drs. Mark and Abby Hornstein and their family, in honor of Mark's mother, Lusia Hornstein, who participated in the Polish Underground and the Warsaw Uprising, escaping the Nazi army by fleeing through the sewers of Warsaw. Her story is here.

Stephen Feigenbaum composed "Songs of Sorrow and Hope" at the age of nineteen. It premiered in 2009 at Prague’s Lobkowitz Palace and had its American premiere in Boston that same year. Jeremy Eichler wrote in the Boston Globe, “The New England Conservatory Youth Chorale under director Beth Willer gave a skilled and spirited performance of the new piece, a thoughtful and earnest setting with piano accompaniment of texts by a Terezín victim (Hanus Hachenberg), a Holocaust survivor (Donna Rubinstein), and Mary Kimani, an African writer addressing the Rwanda genocide.” “Songs of Sorrow and Hope” was the 2009 prize-winner in the Vancouver Chamber Choir’s Biennial Young Composer’s Competition.

“Receiving the Commission from TMF was one of the biggest honors of my life. Hearing the stories of Holocaust survivors gave my music a new sense of purpose, and reflecting on the story of Lusia Hornstein, who fought in the Warsaw Uprising and whose son and his family generously sponsored my Commission, has inspired me to rethink my work over the years. The performance on October 19 feels absolutely like a new premiere; the melodies and harmonies remain the same, but the entire piece is more subtle and restrained, the messages of the poets better articulated. Having the Boston Children’s Chorus premiere this new version is the perfect completion to an already wonderful moment in my life as a composer.”   —Stephen Feigenbaum