MAESTRO RAFAEL FRÜHBECK DE BURGOS
Originally on our concert program; the Maestro had generously planned to conduct the Pavel Haas Study for String Orchestra at our 2014 Gala.

"I deeply regret to share news of Maestro Rafael Frühbeck de Burgos' passing on June 11, 2014, in Pamplona, Spain. One of the great maestros in classical music, Maestro Frühbeck will be greatly missed by my BSO colleagues, the Boston classical music community, and orchestras and music lovers around the world. We will announce conductor for the Pavel Haas Study for String Orchestra at our Gala concert this summer."   —Mark Ludwig, TMF Executive Director 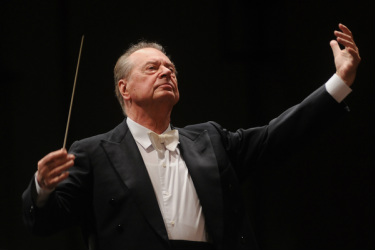 From 2004-2011, he was Chief Conductor and Artistic Director of the Dresden Philharmonic, and in the 2012-13 season began his post as Chief Conductor of the Danish National Orchestra. Maestro Frühbeck made extensive tours with such ensembles as the Philharmonia of London, the London Symphony Orchestra, the National Orchestra of Madrid, and the Swedish Radio Orchestra. He has toured North America with the Vienna Symphony, the Spanish National Orchestra, Dresden Philharmonic, and Philadelphia Symphony Orchestra. Rafael Frühbeck de Burgos recorded extensively for EMI, Decca, Deutsche Gramophone, Spanish Columbia, and Orfeo. Several of his recordings are considered to be classics, including his interpretations of Mendelssohn’s Elijah and St. Paul, Mozart’s Requiem, Orff’s Carmina Burana, Bizet’s Carmen, and the complete works of Manual de Falla.